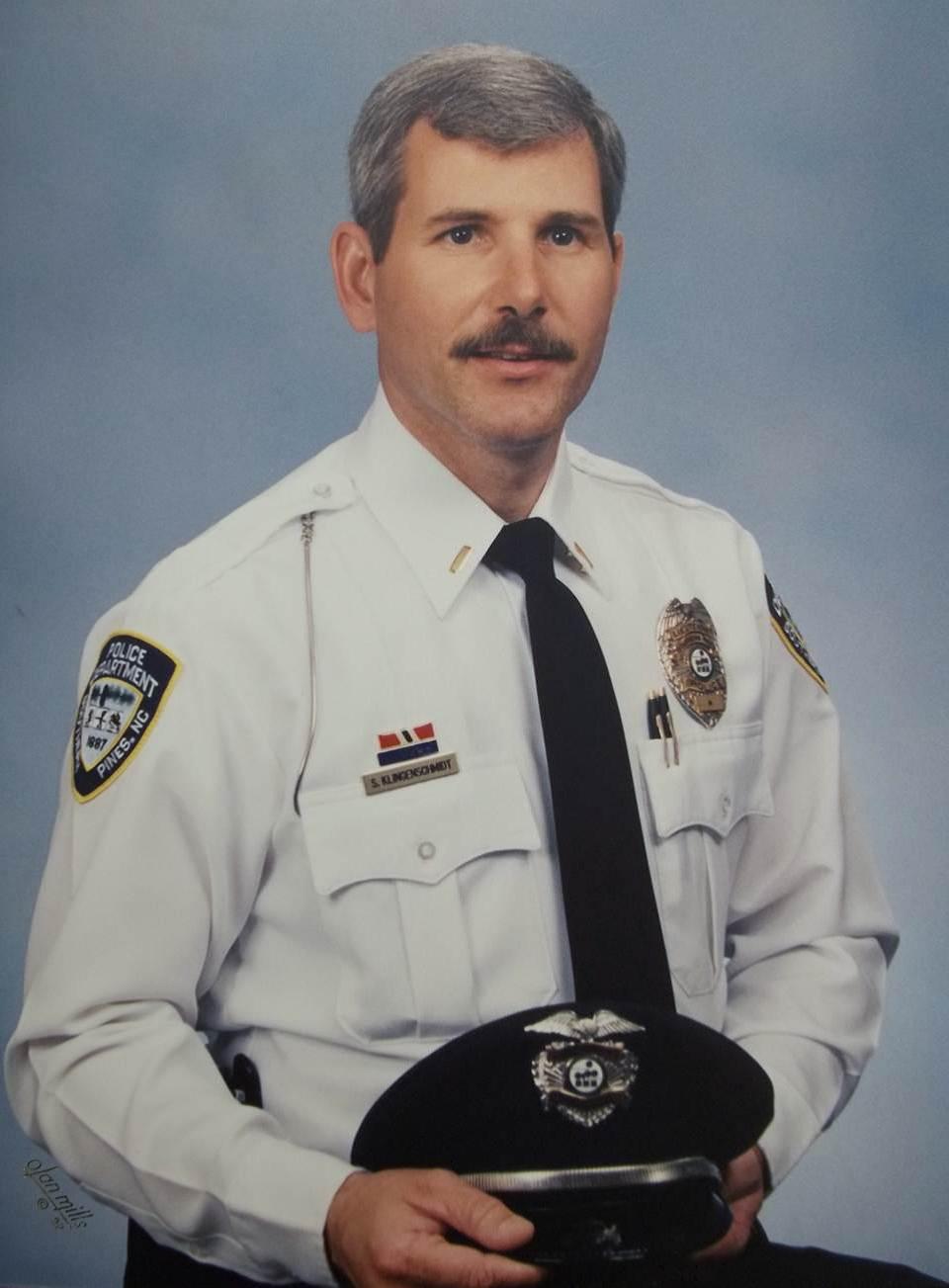 On June 15, 2013, Officer (Lt.) Stanley Klingenschmidt was participating in a Community Oriented Policing event in support of the Special Olympics. While leading a group of motorcycles through Moore and Montgomery Counties, Officer Klingenschmidt's motorcycle exited the roadway into a ravine, which resulted in his untimely death.

A 20 year veteran of law enforcement, Ed Harris, 45, had served for 13 years as a member of the Hoke County Sheriff's Department before going to work for Southern Pines Police Department. Earlier in his career he worked with the Aberdeen and Robbins police departments.

By the day of Ed Harris' funeral, eight young men had been arrested and charged with first degree murder.

"...On April 4, 1991, Detective Ed Harris sat down to have lunch with his partner, Carol McCarn, and SBI Special Agent Tom McSwain. Sitting in the next booth were several men. Harris told McCarn that he knew them to be drug dealers. Later that evening, they gunned him down as he answered the door at his home. He was shot six times in the face. His wife was injured.

The story as told by Jerry Lentz.

"I was a senior at E. Southern Pines High and was working part-time at the Colonial Store, at the corner of Connecticut and NE Broad, when Chief Newton came through the checkout line with a handful of candy bars. He looked at me and said, "These are for the kids".

"That evening, he answered a disturbance call and confronted Willy Gray (Eagle Eye) at the top of a flight of stairs. As he climbed the stairs, talking to Willy and trying to get him to lay down his shotgun, Willy fired a shot into his face, killing him instantly. Sgt Earl Seawell, Officer Odis Bridges, Officer Charles Wilson, and Officer Jerry Wright, who were behind the Chief, dropped Willy with shots from their service revolvers."

"Chief Newton was, at the time, one of the most respected law officers in North Carolina. I recall police cars being lined up for blocks, from agencies all over the state, when his funeral was held at Brownson Memorial Presbyterian Church. From newspaper accounts, there were few unsolved cases on his books. He worked the school crossing himself many times at New York Avenue and May Street. His love and compassion for children was well known."

He was a fine peace officer and human being.

"...Newton was the grandson of Squire Shaw, the first mayor of Southern Pines, and grew up in the Shaw house. He went to serve a warrant with several other officers while he was off duty. The warrant was on Willie "Eagle Eye" Gray, 46. The charge was assault on a female, involving an alleged attack on his daughter. Gray was said to have sworn he would die before being arrested again after a 1959 larceny arrest. At 9:20 p.m., Newton and Officers Earl Seawell, Odis Bridges, Charles Wilson, and Jerry Wright arrived.

"Let me go first," the chief told the other officers.

He had to navigate a narrow stairway to get to the second floor of the house on West Massachussetts Avenue, where Gray was hiding. Gray stepped from a doorway above Newton, leveled a shotgun and fired, striking Newton above the right eye. Seawell ran to his car and radioed for help. Soon officers from across the county arrived. Knowing that he couldn't get out, Willie Gray came down the steps holding a flashlight and a knife. Officers' bullets cut him down, and his body fell right beside his victim.

The Pilot wrote an editorial about Newton that could apply to many an officer lost in the line of duty:

"Surely this fine man's record of understanding service to his community, of devotion to duty, of indomitable courage, will live to be an inspiration to the people of the town he loved so well and to those who will follow in his footsteps."

"...Durham native Jasper Addison Gargis took the chief's job after Beasley. His death, though it occurred in the line of duty, was attributed to natural causes.

On Christmas Day, 1939, Gargis responded to a call at the same intersection at which Dietz had shot Kelly a decade earlier. There was a disturbance. An unidentified traveler from New York had "lost his mind" and was disrupting traffic on the highway, then called U.S. 1.

He had been driving an old school bus that had been converted into a mobile home. He was traveling with a companion, who had noticed that the man had started to behave strangely.

In Southern Pines, the man suddenly stopped the bus and began stopping cars and signing over travelers' checks to the people in them. Then he started stealing people's keys and tossing them into the woods. He started taking other items from people's cars and tossing them around.

Gargis arrived and struggled violently with the man, eventually subduing him. After wrestling him into a cell, Gargis went back to his office, where he sat down and promptly suffered a fatal heart attack."

"...Beasley, it said, had befriended a local man named Everett McLean. McLean was facing an attempted murder charge in Boydton, Va., for throwing his wife, Pearl Gilchrist McLean, off a bridge. She survived and actually reconciled with her husband.

She tried to get the charges dropped, but the police would not agree. McLean went to his friend Beasley for help. Beasley, it turns out, would have been one of the major witnesses against McLean because he could testify that McLean had tried to kill his wife before.

Beasley was from Norfolk, Virginia. He agreed to try to help and volunteered to drive there. He frisked McLean before putting him in the back seat. On October 21, 1931, they left. The car was full of people. Beasley drove, and Pearl McLean sat in the front seat with him. Everett McLean sat in the back with the couple's child, his sister Georgia McLean, and a man named Junius Austin.

The Boydton police still refused to drop the charges. On the way back, near Durham, McLean produced a gun from somewhere and shot both Beasley and Pearl McLean in the head. Beasley was shot several times and died, but the woman survived.

The Pilot speculated as to his motives in the following passage: "So there before him sat the two he might have regarded as his chief enemies, at the mercy of the gun that somehow happened to come to his hand."

Without a driver, the car overturned. The accident killed McLean's sister, Georgia. Pearl McLean was hurt, but still alive. She feigned death as McLean and Austin crawled out of the vehicle with the child. (She lived through the ordeal and eventually remarried and had a full life.)

The two men fled the scene and at some point abandoned the child, who was never heard from again. In town, the men's torn clothing and bloody faces drew attention. Police captured Austin, but McLean jumped into a cab to Raleigh. He paid for a bus to Norfolk but never took it. Police eventually located McLean in Tarboro.

McLean's story ended at the Moore County Jail. "No sooner had the cell door shut," the paper reported, than he hanged himself with his belt in a cell full of other arrestees.

The Moore County sheriff at the time, C.J. McDonald, said that many people accused officers of allowing it to happen and even watching.

"People said we stood there and let him kill himself right in front of our eyes rather than bring him to trial," he was quoted as saying, "but this was not so."

Research provided by Matt Moriarty and Intern Kirsten Beattie of the Pilot Newspaper (May 31, 2006)

"...On the day of his death 77 years ago, Kelly went to the intersection of Massachusetts Avenue and May Street, which was then also the main highway through town. (It was called Highway 50.)

The Chief went there to direct traffic as school got out. When a car blew through the crossing, Kelly got into his car, gave chase, and pulled the man over. This occurred during prohibition, and the paper reported that Kelly was suspicious that the car might be involved in bootlegging.

He asked the driver to step out of the vehicle so that he could search it. The driver suddenly pulled out a gun and fired. It was not reported where the bullet struck Kelly. He was strong enough to return to his car and drive the few blocks to Dr. W.C. Madgett's office.

Kelly collapsed bleeding in the yard in front of the office. An ambulance came and took him to the closest hospital, which was in Fayetteville. He died there the next day.

After the shooting, the assailant abandoned his car, ran to a parked car, and tried to start it. The owner of the car, a man named Homer Eckert, approached and asked the man what he was doing. He told Eckert that a man had been shot and he needed to get a doctor.

Eckert got in and took the assailant to the Carolina Hotel, where the assailant had said he could find help. He went into the hotel, left through a back door, and headed to the Pinehurst Garage, where he stole a Buick. Eckert waited at the hotel for an hour before heading back to Southern Pines. Only then did he learn who the victim had been.

The stolen Buick apparently was spotted in Candor and Monroe and was later discovered abandoned in the woods in Monroe.

The new chief, Benjamin Beasley, used letters left in the killer's car to track him to an unknown town in West Virginia. The local police in that state took the man, named Granville Dietz, into custody. Apparently he was not bootlegging, but was a fugitive from a burglary charge.

Dietz escaped from the police in West Virginia and fled north. His girl friend sold him out by telling officers that she'd wired him money in Willisocket, Maine. This time officers caught up with him and he was convicted exactly two months to the day after the murder. He was sentenced to serve 25 to 30 years in prison.

A few months later, he escaped from Caledonia prison and was never heard from again."