There is a long history of caring and support for library service in Southern Pines.

In October of 1899, the Lend-a-Hand Circle of the King’s Sons and Daughters service organization established a lending library and reading room in their Hall which stood on West Connecticut Ave. between Bennett and Broad, on the same block as the current library! This library received some of its collection from the Andrew Carnegie Traveling Libraries. Books arrived by train, along with free packets of flower and garden seeds.

The Hall was sold in 1920 and records indicate that the library service ceased when the last charter member died in 1921. However, the citizens were quick to reorganize. The “North Carolina Library Bulletin” of March 1922 reports that “On December 27th (1921), the people of Southern Pines held a meeting in the interest of a public library." They formed the Southern Pines Library Association. The Association established and maintained the library, loaning books to members and providing a free public reading room. Membership was open to citizens and visitors and annual dues were one dollar.

In 1938, the Town held a special election to authorize a bond issue to purchase land next to the post office on Broad Street and build a municipal building. This action was challenged in the State Supreme Court when it was apparent that the building would be used for the library. At the time, state law forbid the expenditure of municipal funds for anything other than a “public necessity” and a library was not considered a necessity. The Town argued that the purchase of land with municipal funds was allowed because “the erection of a library building is wholly incidental to the purpose of the defendants in acquiring said site for the location of municipal buildings.” In other words, there was plenty of room for a library and any other municipal building that the Town might choose to build. Ultimately, the Town received a grant from the Works Progress Administration and raised the required matching funds through private donations to build the building.

The library continued to be privately funded until 1958. At that time, cost of operation and usage of the facility had increased to the point that the Association could no longer meet demands for service. They asked the Town of Southern Pines to assume responsibility for the operation of the library, and in June of 1958, the library became a department of Town government. Thus, the Town now uses municipal funds to provide library service for Town residents and is one of eleven municipal libraries in the state of North Carolina.

The other municipal buildings were never built on the Broad Street lot; instead, the library was enlarged several times until it filled the space to overflowing. After much study and public debate, the Town Council voted on February 10, 1993 to purchase the property at the corner of Bennett Street and Connecticut Avenue to build a new library. The old library building remains on the Broad Street lot, and now houses the Town of Southern Pines Water and Utilities Department.

The current facility opened to the public on July 5, 1995. The building features a unique design, with the exterior incorporating many features found in area buildings, such as bow windows, parapets, a metal roof, and arched openings. Interior highlights include a wood-ribbed vaulted ceiling in the center of the building, clerestory windows, and a cozy leisure reading area.

Original artwork was commissioned for the building by the Friends of Southern Pines Public Library. Two 8' by 5' tapestries hang in the main reading room; they depict the  flora and fauna of the Longleaf Pine forest found in the Sandhills area. Linda Weghorst of Durham, North Carolina, created these original designs and wove them on a traditional tapestry loom. The tapestries were fabricated at the rate of one inch of weaving per hour and took nine-and-one-half months to complete. Three oil paintings by Raleigh artist Kyle Highsmith hang in the quiet reading area at the far end of the building. These paintings depict familiar local scenes of downtown Southern Pines and Weymouth Gardens. In the characteristically exuberant Impressionist style of the artist, the paintings shout a greeting to library patrons. 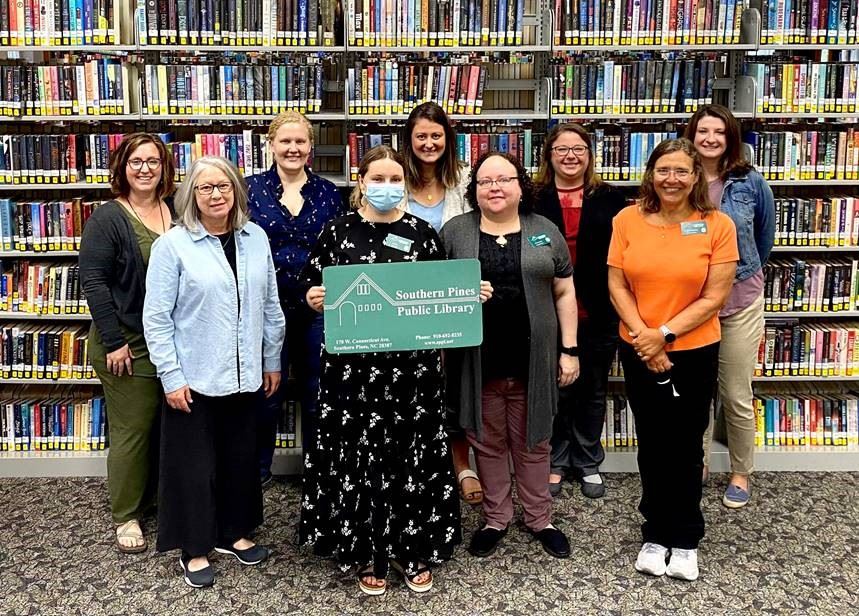